4 Books Every Guitarist Should Have on their Santy List

Hi! My name is Declan Zapala. You may remember me from such YouTube videos as Crystal, Broken Rhapsody, and Epic Fails 2013: Cherubs Edition. You may also have no idea who I am, in which case, how are you even reading this?

Either way, welcome to the first installment of what I hope will be an occasional-but-regular blog about all things guitar – or other such pertinent matters.

This year has seen an unprecedented number of books come onto the market (here in the UK at least) by a variety of leading guitarists from different circles so I thought, as my first blog entry it would be nice if they were collated in one place, popped on a pedestal and reviewed so that humanity might marvel in astonishment at their brilliance! 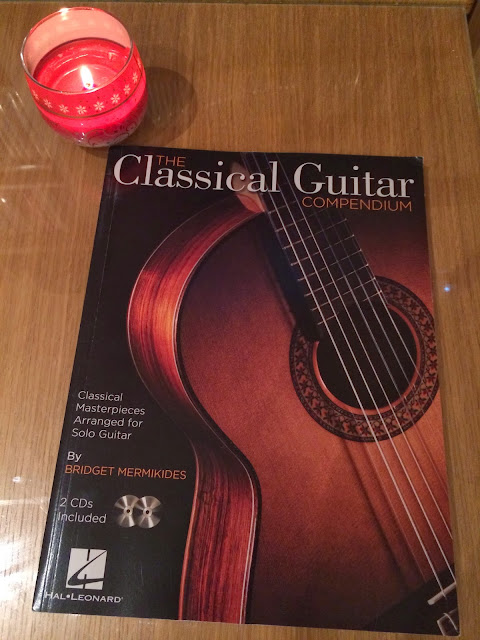 First up is the new book by the classical/electric guitar chameleon that is Bridget Memikides. Alongside her exploits as one half of the Bridget Mermikides & Amanda Cooke classical guitar duo, she is an accomplished blues guitarist, not to mention an examiner for end-of-year student recitals at prestigious institutes such as the RCM. Did I mention she taught Bill Oddie the guitar on a show for the BBC back in 2007? No? Well, she did! Most importantly, though, Bridget has a monthly column in the magazine Guitar Techniques in which she puts together her own arrangements of popular pieces of classical music, and, on top of that, prepares exercises to accompany her arrangements of technical pieces by 19th century guitarist composers including Matteo Carcassi, Mauro Giuliani, Fernando Sor, and Francisco Tárrega. This helps make the approach to learning these composer's pieces more accessible to student guitarists. The Classical Guitar Compendium is a collation of these pieces from 3 year’s-worth of the monthly column – for the record, that is A LOT of music! It is so enormous I am officially renaming it ‘Bridget Mermikides - The Guitar Yellow Pages’.

Rather helpfully the compendium comes with 2 CDs of Bridget playing each piece from the book! The fact the music is spread across 2 CDs gives you an idea of the scale of this book. As a bonus, the CDs are in fact quite lovely to listen to as standalone discs, whether you are learning the pieces or not!

To summarise, because of the tutorials and exercises, alongside the vast plethora of arrangements, this is an ideal book for any amateur or student guitarist looking to boost their technique as well as their repertoire. For the professional guitarist, however, there is also concert grade repertoire as well as arrangements suitable for weddings and functions. A really useful addition to any guitarist's repertoire collection! 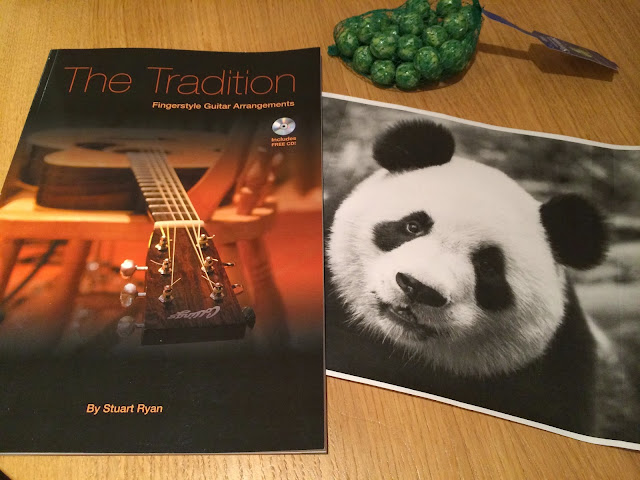 Before I continue, I must inform you that I had my copy delivered in the post and gave the special instruction “draw a picture of a panda on the packet” when completing the order form on Stuart’s website. That explains the rather angelic image of a panda next to the book – not quite a ‘drawing’ as I specified, Stuart, but lovely nonetheless!
Stuart is another distinguished guitarist to have written for the magazine Guitar Techniques, as well as the magazines Total Guitar and Guitar - through these magazines he has written and recorded over 500 hundred lessons! That's a lot of hours of dedication, both for Stuart and his following of guitar enthusiasts! His omnipresence as a fingerstyle performer and guitar tutor has led him to become one of the leading players and educators in the field of steel string guitar; something that is reaffirmed when you check out some of his YouTube videos.

Watch Stuart Ryan Playing His Arrangement of 'The House Carpenter'

Aside his skills as a performer and teacher, he is an extremely able arranger of guitar music – The Tradition is a collection of solo guitar arrangements of traditional Celtic and American music which show off Stuart's arranging skills. The pieces are all short and sweet (averaging 1-2 mins long) and are really easy to get under the fingers. I found the book is a nice way to relax into new short pieces of repertoire over a glass of scotch, and the Irishman in me had particular fun learning Sliabh Russell. Once again the book comes with a CD to help with the learning process - and like Bridget's book , the CD is quite nice to listen to regardless of whether you are learning the music or not.

In summary this is a really great book if you fancy learning some short pieces of traditional music that are not only fun to play but quick to learn. 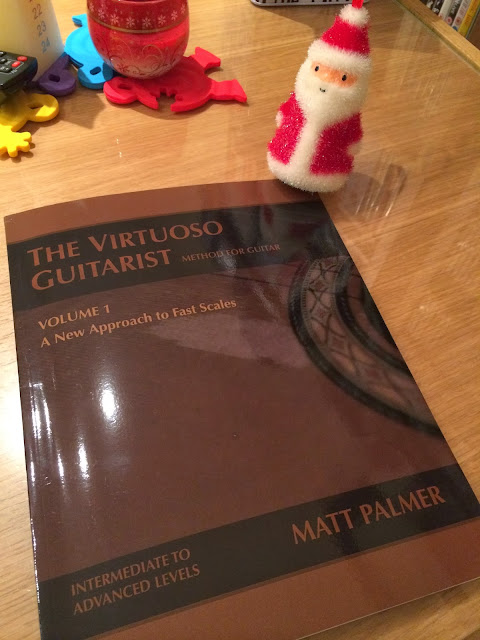 I first saw US classical guitarist Matt Palmer in Germany competing in the Koblenz International Guitar Competition back in 2006 and was taken aback by the intimidatingly effortless speed with which he was able to play his repertoire – his performance of Villa-Lobos’ Etude No.2 left me slightly stunned; so much so that when I recently chanced upon a YouTube video of Matt playing that same piece (see the video below) I immediately became curious to see what he has been up to since the days of Koblenz.

After a quick Google search the first thing I came across was this book. Now, this book doesn't quite fit in with the "new books by UK guitarists theme" but it's just so good I couldn't leave it out...

It is important to note that at this point that, as a guitarist, you never truly feel that your technique has hit its peak (well, I haven't met a guitarist who has said otherwise!) - it always has room to grow, which is why as soon as I saw this method book I had to order myself a copy. I'm glad the book came so quickly in the post as within 2 days of working through some of it I was able to do things I never thought I'd be able to on the guitar (more about this below!).

Before studying the classical guitar, Matt spent over a decade of his youth studying the electric guitar, becoming an accomplished virtuoso on the instrument, and it is the 'outside-the-box' wisdom he has to impart from this experience that makes this book such a worthwhile investment for any classical guitarist. *I'm going to get technical now, so the non-guitarists amongst you might want to skip the rest of this paragraph.* The book is centred around the idea of grouping scales into three notes per string and using the annular, middle, and index fingers to quickly rattle through them in consecutive bursts of three notes. Tone can be an issue when it comes to playing this way, which is why Matt dedicates a lot of the book to exercises that improve this aspect. Personally I found myself better able to bring scales up to speed if I replaced my annular finger with my thumb such that, after only 2 days of including it in my practice routine, I was able to reel through a 2 octave D major scale lightning fast – check out my 12-sec video:-

In summary, this is a miracle book for enhancing your virtuosity as a guitarist, although let it be known that this is a stave-only book so any TAB junkies will need to get a basic idea of how to read from the stave before approaching this one.

Available to order from www.mattpalmerguitar.com 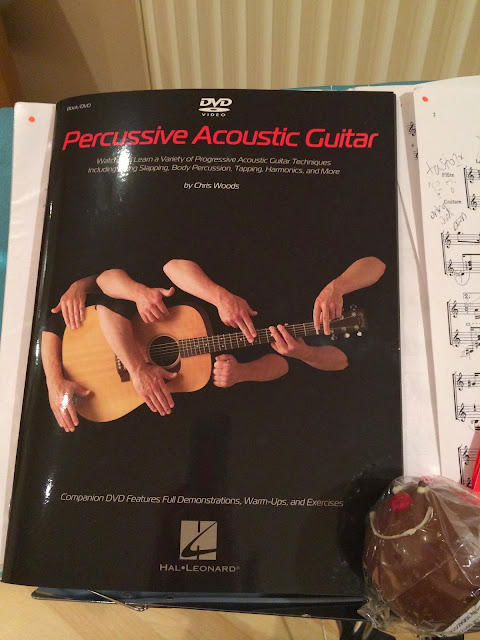 Finally someone has gone and made a method book for getting into percussive fingerstyle guitar music! I have constantly had pupils in the past wanting to learn music by the late Eric Roche, Thomas Leeb, and Jon Gomm, but the problem is they have not had the proficiency as a player to approach ithe percussive elements technically and, more often than not, have been frightened away from the style altogether – their reaction to seeing a percussive fingerstyle score could be likened to that of a dog being shown a magic trick *tilts head*.

This book is for experienced guitarists who already know their way around the fret board to some degree of proficiency, and is a means of building up the coordination of one's percussive abilities through a series of exercises and pieces. Chris thoroughly covers basic string slapping and body tapping in conjunction with plucked, strummed, and slapped notes and harmonics, all in great detail.  For the uninitiated this book is invaluable, and for the already-initiated Chris goes into details about advanced percussive trickery which I am sure will be useful to writers and arrangers seeking to embellish their music.

I find that the concept of a tuition DVD can sometimes be a bit of a red herring as far as tuition is concerned - having the TAB/stave available is enough for many guitarists, and what is in fact helpful is just having the music on CD - not something to take your attention away from the music in front of you (like Bridget and Stuart's books earlier on!); this is simply so that the player has a clear idea of what the piece they are learning is meant to sound like. In this instance however, because of the gesticular and visual nature of percussive fingerstlye playing, being able to see what you are learning is half of the picture. The interchanging movements of the hands and arms could be likened to a dance involving only the upper body and so a tuition DVD is essential. Chris' DVD makes it extremely clear where the hands should be laterally positioned as you progress around the various exercises and pieces. The notation in the book is super clear too, making it a really easy book to work your way through.

To summarise, this book is the missing link in percussive guitar pedagogy - I will personally be recommending this to all my pupils and friends looking to get into this style of music!

Available to order from www.chriswoodsgroove.co.uk

As you can see, there's a lot of stuff to learn out there so go and update that Santy list before its too late!

Happy holidays guys and thanks for reading!!